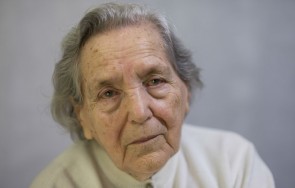 The 15th Human Rights Film Festival organize the exhibition Emeek emana, that will be open at the Aiete Cultural Center between March 23rd and May 7th.

An exhibition composed of photographs and narrations endeavouring to recover the points of view of Basque women in the historical content of the Coup d'état, the war and the Franco dictatorship.

Among other questions, it includes narrations and experiences related to the battlefield, exile, torture, prison, repression and survival strategies, also looking at activism and organised approaches to social structure. But always, as said, from the angle of women.

Our aim with this exhibition is to transmit the decisive part played by women in a time of agitation, change and injustice.

Exhibition produced by Mauro Saravia and Intxorta 1937 Kultur Elkartea. With the collaboration of Gipuzkoako Foru Aldundia.