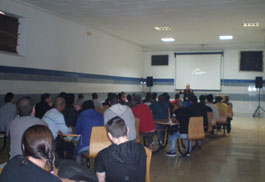 Among the activities aimed at enhancing accessibility for people who find themselves excluded from cultural initiatives of this type, the Human Rights Film Festival will be screening the film Bring the Sun Home, followed by a debate at the San Sebastián Penitentiary facility.

Maura and Rosa, two almost illiterate women from a village with no electricity in El Salvador, have just arrived at Barefoot College, in India, with another forty women from all over the world, to attend a course on how to install solar panels. They have never been separated from their families, and they don’t speak English. At the same time, in South Peru, Jeny and Paula, who have recently returned from the course, demonstrate that Barefoot College is a place where the impossible is possible. Before they were wives and mothers. Now they are solar engineers who travel from village to village, fitting panels to bring the sun home.