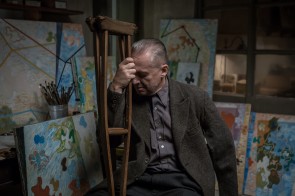 After World War II, the famous painter Wladyslaw Strzemiński, creator of the theory of Unism and one of the most important fine arts artists of the day, works as a professor at the Łódź School of Fine Arts. The Polish authorities scorn his work, far removed from the socialist realism doctrines they strive to impose. Strzemiński refuses to obey the Party dictates and is expelled from the university and from the artists' guild. Unable to find work and with no money, having lost an arm and a leg in the 1st World War, he scrapes a miserable existence while continuing to paint and complete his famous book Theory of Vision.

Last film by the master of Polish film, Andrzej Wajda (1926-2016), focussed on the latter years in the life of one of the greatest representatives of European avant-garde art of the first half of the 20th century.