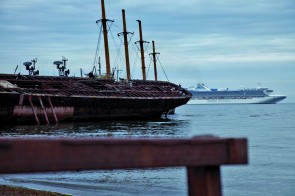 Extractivism and tourism at “world’s end”

Zona Franca is a rundown shopping precinct in Chile's Patagonia region, near the Strait of Magellan. The entire region has been ravaged by the scars of a brutal transformation that has turned America's last untouched area into a mirror of today's consumer society. Amongst the remains of history and groups of tourists on a quest to find the end of the world, a gold prospector and a truck driver resist the changes which threaten to destroy their homes with a seemingly underlying violence that soon erupts when a strike brings the area to a standstill.