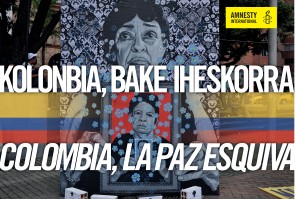 The 15th Human Rights Film Festival organize the exhibition Colombia, elusive peace, that will be open at the Central Library (Alderdi Eder) between March 21st and April 12th.

There is talk of peace in Colombia. Negotiations, ceasefire, agreements... Hope, finally, at the end of a long road. More than 50 years of armed conflict: 265,000 people dead, 6 million displaced, 45,000 victims of forced disappearance... are only a few of the terrible figures of the confrontation. The immense majority civilians, and almost a half women.

And now we hear the word peace. It is the best opportunity in more than a decade to end the hostilities. But peace continues to behave elusively without truth, justice, repair and the respect for human rights. Peace cannot be built on impunity. Those responsible must pay for all of the horrendous crimes hidden beneath the Colombian conflict.