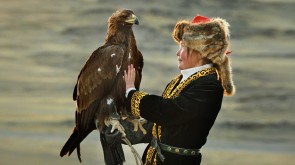 The film The Eagle Huntress (USA, 2016), directed by Otto Bell, has been awarded with the Audience Prize to the Best Feature Film at the 15th San Sebastian Human Rights Film Festival, that ends tonight.

Tonight (20:00) is the Closing Ceremony at the Victoria Eugenia Theater, where the prizes will be given and that will end with the screening of the film Glory (2016).