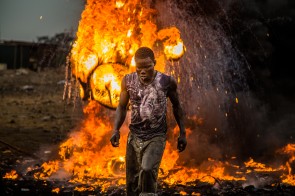 The film The Accordionist's Son (Soinujolearen semea / El hijo del acordeonista, 2018), directed by Fernando Bernués, will open the 17th San Sebastian Human Rights Festival, organised by the City Council's Human Rights Department and Donostia Kultura, on April 5 at the Victoria Eugenia Theatre. The Festival will run from April 5-12 at the Victoria Eugenia, main hub of the event, and in various other parts of the city.

Like every year, the festival will look at different topics, including among many others the citizens' network to welcome migrants (Paseko txoriak), the demands of chambermaids (Hotel Explotación: Las Kellys) or the situation of young people in the Sahara (Hamada); it will address the project Yarn against sexist violence with the premiere of the documentary Hilos de sororidad and will travel through time to the Balkan War (The Load), to the killings in Cambodia by the Khmer Rouge (Funan) and to the trial against Nelson Mandela and his comrades (The State Against Mandela and the Others).

During the talks following the screenings running at 19:00, participants will take a closer look at current topics, with the participation of representatives of the films (directors, protagonists, etc.), as well as persons, activists and organisations working in the field of human rights, who will share their experiences with the audience.

Like every year, different exhibitions will be organised around the Festival: Women of the Congo, by Isabel Muñoz (Okendo CC), The Rohingya Exodus (Doctors Without Borders) (Aiete CC), the 15th edition of Art and Human Rights by Children and Youths (Victoria Eugenia Theatre) and The Last Man on Earth (FNAC).

Here you'll find some of the other movies that will be screened at the 17th San Sebastian Human Rights Film Festival:

Cameron Post’s life changes completely when her boyfriend catches her with another girl in the back seat of a car on prom night. Her aunt and guardian ships her off to a therapy centre for “teenagers struggling with same-sex attraction”. At the facility, Cameron is subjected to outlandish discipline, obvious de-gaying methods, and earnest Christian rock songs. But this unusual setting also introduces her to an unlikely community who instantly become her new family.

The struggle against apartheid in South Africa, a collective effort

THE STATE AGAINST MANDELA AND THE OTHERS (2018). Nicolas Champeaux, Gilles Porte. France

On the centenary of his birth, in 2018, the story of the struggle against apartheid in South Africa tends to focus on its leader: Nelson Mandela. But another eight men, like him, were faced with the potential death sentence in that historic trial which took place between 1963 and 1964. Faced with a punctilious public prosecutor, they decided to turn their trial into a platform against apartheid. Today, thanks to the recently recovered audio files of the hearing, and with the first-hand testimony of people who lived through the events, this documentary looks at those days and at that trial.

April 1975. Chou leads a peaceful life in Phnom Penh, until the morning the Khmer Rouge plunge Cambodia into horror. In the following weeks they set about deporting vast areas of the population to the countryside. During the journey, Chou sees his 4 year-old son disappear into the crowds. His world crumbles around him, but he refuses to lose hope. Funan tells the incredible and powerful story of a mother and father who struggle to save their son and to keep the family together in times of war.

Sahara: generations born in exile and without a future

A minefield and the world’s second biggest wall separate Sidahmed, Zaara and Taher from their home; they’ve never been there and have only heard about it from their parents’ stories. They belong to the Saharawi people, forgotten by the world, abandoned in the desert since Morocco expelled them from the Western Sahara 40 years ago.

Hilos de sororidad (Yarns of Sisterhood) tells the tale of the project Yarn against sexist violence. From the origins of the Harituz association in Astigarraga and guided by its protagonists, it describes the meetings, stories, actions and voyages at home and abroad. In this project, knitting is the vehicle which unites very different women, who become knitters in the fight, and who stand up to sexist violence from sisterhood. The Yarn, an enormous collective bow in progress, which is already more than 6 km long, is a space of symbolisation, where every stretch represents a life taken by sexist violence.

More than two hundred thousand women work as housemaids in Spain, doing a job as invisible as it is essential in the hospitality sector. This documentary looks at the lives, the problems and the struggle of the Kellys (the nickname for girls who clean hotels). While the Government proclaims the strength of the tourist industry in Spain as the flagship of the GDP, the girls’ working conditions progressively worsen, leaving them with as little as 1.5 euros per bedroom.

The heavy load of the Balkan War

Vlada works as a truck driver during the bombing of Serbia by NATO forces in 1999. His latest job is to carry a mysterious load from Kosovo to Belgrade, through a territory which is unfamiliar to him, inhospitable and dangerous, in a country ravaged by the war. He knows that when the work’s done he’ll have to go home and face the consequences of his actions.

It all started in July 2018. Groups of migrants coming from Africa endeavouring to cross the border with France started arriving at Irun train station. They would sleep in the street. The NGOs working in the town succeeded in convincing groups of squatters to react and lend them their places. This wave of generosity spread to the people of Irun.

Africa: cemetery for our e-waste

Agbogbloshie, in Accra, is the world’s biggest e-waste dumping site. Some 6,000 men, women, boys and girls work and live in this place they call Sodom. Every year around 250,000 tonnes of pieces of broken computers, mobile phones and all sorts of electronic devices arrive from a distant and digitalised world. Illegally.