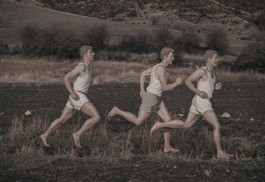 The exhibition The Last Man on Earth (Joan Alvado), included at the 17th Human Rights Film Festival, will be open at FNAC between March 2nd and May 19th.

The Last Man on Earth is a photographic essay based on the personal hypothesis that the depopulation cannot be reversed, given that in the medium term there will be no alternative economic engine to agriculture for the rural areas affected. We can therefore perceive a future in which an increasingly greater area of the Earth's surface will be total or partially devoid of human presence. And this tendency will generate scenarios where living in these areas won't be as we know it today. The intention is to make an open reflection on the potential future of these areas and to look at our responsibility towards them.