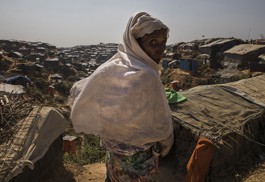 The 17th Human Rights Film Festival organize the exhibition from Doctors Without Borders The Rohingya exodus, that will be open at the Aiete Cultural Center between April 3rd and May 30th.

Photography exhibition on the world's biggest refugee camp, home to the Rohingya minority, one of today's most forgotten populations.

Victims for decades of persecution in Myanmar, in August 2017 they were the objective of a violent military operation meted out by the Burman security forces, causing the biggest exodus in the history of that community. Now, more than 900,000 Rohingyas scrape by as best they can packed into precarious settlements made with bamboo poles and sheets of plastic in the Bangladeshi district of Cox's Bazar.

Because this number conceals persons and stories that don't deserve to be forgotten, this exhibition and the 360º video seek to put you in their shoes.