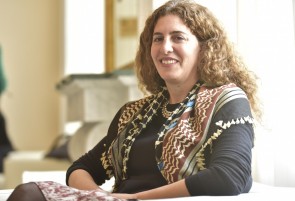 The filmmaker Annemarie Jacir will receive this year the Award of the 17th San Sebastian Human Rights Film Festival. The prize ceremony will be at the Victoria Eugenia Theater on Friday 12 at 20:00, at the Closing Night of the Festival.

The Palestinian filmmaker Annemarie Jacir has written, directed and produced some 16 films in her career, always on the subject of her homeland. Born in Bethlehem in 1975, she lived in Saudi Arabia and later the United States, where she studied and began working as an editor, camera operator and other jobs within the film industry.

Several years and projects down the line, she returned to her origins in 1997 and became the co-founder of Philistine Films, with its headquarters in Palestine and Jordan, a promotor of independent Arab film with different works, such as The Twenty Impossibles (2003), first Arab short film to participate in the official selection of the Cannes Festival, directed by Jacir, and the documentary produced by her, Until When (2004). In 2003 she was one of the founders of the Dreams of a Nation project and organised the biggest travelling film festival in Palestine.

In 2008 she became the first Palestinian woman to direct a feature film, Salt of this Sea (Milh Hadha al-Bahr), winner of the Cinema in Motion Award at the San Sebastian Festival which also screened at Cannes, telling the story of a Palestine woman born in the USA who decides to return to her homeland.

In 2012 she directed When I Saw You / Lamma Shoftak, set in the days following the Six-Day War, when thousands of Palestinian men and women had to seek refuge in Jordan, Best Asian Film Award winner at the Berlin Festival.

A father and son who have been living in Rome for several years and return to Nazareth for a wedding are the stars of her last film to date, The Wedding Invitation / Wajib (2017), winner of 36 awards at international festivals.

Strongly committed to teaching and preparing young local talents, she actively works through her production company to promote the region's cinema. She has given classes in Columbia, Bethlehem, Birzeit University and in refugee camps in Palestine, Lebanon and Jordan.