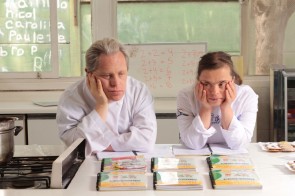 Rights of people with Down syndrome

A group of people with Down syndrome have been going to the same school for 40 years. They've passed all their courses and now they want to stop studying and start working. Even their parents, who used to accompany them, are no longer with them. They've been there longer than most of the teachers, and they've had enough: they want to be treated like adults, not children.

Chilean film director and documentary maker Maite Alberdi –La once (2014)– presents a story linked to her own life: "I lived with an aunt who had Down syndrome all my life, and my grandmother's greatest fear was what would happen to her daughter when she was no longer there".