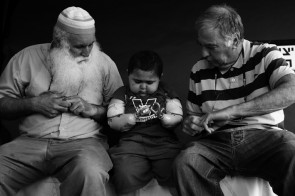 For the past seven years Muhi, a boy from Gaza, has been living in an Israeli hospital accompanied by his grandfather. His limbs were amputated to save his life and the specialized care he needs is not available in his homeland. The only home he knows is the clinic, where he learns how to use his prosthetic limbs under the care of his doting grandfather. But the two are in constant danger of being deported from the country, and the family cannot visit as often as they'd like since leaving Gaza is not easy. As Muhi gets older, the situation becomes increasingly complicated.