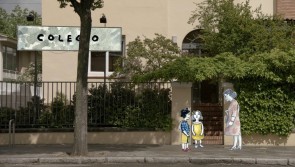 Six-year-old María arrives at a new school and some of her classmates decide to sour her arrival. They call her names and won’t leave her alone. Victoria is fourteen years old and was the target of all kinds of harassment at school for way too long, resulting in post-traumatic stress disorder. Mario is eight years old. At school they called him "fatso", and three children from his class beat him every day. He completely lost his self-esteem and began to stutter. Emma is ten years old. The school's anti-bullying protocol made her the most pointed-at girl in school; she was left without friends.