2017. In the face of the humanitarian disaster known as the migrant crisis, several groups of volunteers dedicate their time to initiatives, programmes and activities carried out in different places. The documentary shows four parallel stories, highlighting the work and effort of members of the Basque organizations, associations and platforms CEAR-Euskadi, Zaporeak, Ongi Etorri Errefuxiatuak and Salvamento Marítimo Humanitario.

Georges and Anne are a retired couple who live in Paris after having dedicated their lives to teaching classical music. Their daughter lives in London with her husband. When Anne has a heart attack, leaving one side paralyzed, the love that has united the couple for so many years is put to the test.

Talka is a collection of testimonies of women from Peru who, at different times in the country’s history, have had to suffer the same reality: machismo, patriarchy, violence.

The lights and shadows of Plato's cave inspire this story. The conflict between life and death in the world of Ana...

Night has fallen on the working-class La Paz neighborhood of Donostia. Forty-year-old Mery takes the last drag on her cigarette, sitting the edge of the only window in her small miserable apartment.

In a world of deep-rooted homosexual traditions, twenty-year-old Xabi returns home after his studies period in Brazil. At dinner, Xabi will confess to his two mothers that he is in love… with a girl.

Ramona’s mother leaves her home and her daughter. Ramona’s grandmother constantly reminds her of it. Until she develops a wound that won’t close.

While Bollywood films feed the imagination of millions of youngsters in India by projecting wonderful and passionate love stories, the reality is quite different. 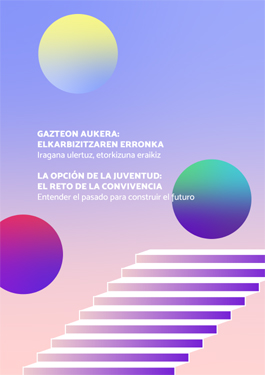 This documentary shows the efforts by the Youth Council of Euskadi, in collaboration with the General Secretariat for Peace and Coexistence of the Basque Government, in active peace-building. It is the result of two years of work (2014-2016) in which more than 250 young people took part in the different initiatives undertaken by EGK to promote a culture of peace and coexistence.

A heartbreaking animated short film that illustrates the migrant-rejection crisis from the eyes of the migrants taking the Mediterranean route.

A documentary by MSF about the continuous bombing of hospitals in war zones following a U.S. airstrike on an Afghan hospital in Kunduz on October 3rd, 2015.

The need to bear witness to horror was the fundamental principal behind the creation of MSF. In the 1970s, a group of journalists and doctors who witnessed the silent drama unfolding in Biafra decided to start an organisation with a view to alleviating the suffering of the population and speaking out publicly against the atrocities being committed.

1971. Delphine, a farmers’ daughter, moves to Paris to escape the family yoke and become financially independent. Carole, a feminist militant, lives with Manuel in Paris. Delphine and Carole meet, and their love story will change their lives forever.

One morning, railway worker Tsanko Petrov finds a bag stuffed with a huge amount of money on the tracks. He decides to report it to the police. The Ministry of Transport authorities, splattered over the front pages of the newspapers in relation to a case of corruption just at that time, decide to reward Petrov for his gesture and generate a piece of positive news.