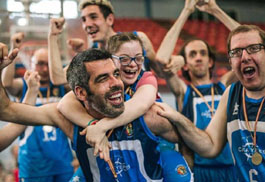 Among the activities aimed at enhancing accessibility for people who find themselves excluded from cultural initiatives of this type, the Human Rights Film Festival will be screening the film Campeones, followed by a debate at the San Sebastián Penitentiary facility.

Marco is the second coach of a basketball team in the Spanish first division. He has problems at work, with his partner, and with almost everything around him. One day, in the middle of a game, these frustrations explode in the shape of a huge altercation with the first coach, sending him off on a binge ending in a traffic accident that lands him in court. While he loses his job and his relationship falls to pieces, he is sentenced to coach a very special basketball team. To his great surprise, Marco will be the one who will truly learn from his adventure with a team where the love of living and attention to the things that really matter prevail.