Africa: cemetery for our e-waste

It’s more than likely that your phone, computer or camera will end its days far from here, on the African continent. Every year the United States and China, but above all Europe, send five million used electronic devices to Ghana. 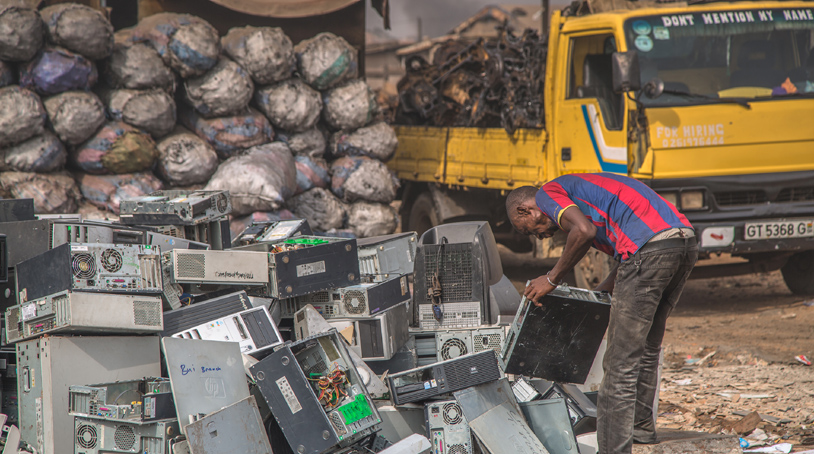 Many of our devices end up in the dump at Agbogbloshie, a suburb of the Ghanaian capital, so that we in their countries of origin avoid the cost of recycling them. Because of our e-waste, Agbogbloshie is the world’s most contaminated place.

In 2014, lead concentration in the soil of the dump was a thousand times higher than permitted, and the water and land pollution has exterminated all biodiversity in only a few years, according to a UN study.

In 2014, lead concentration in the soil of the dump was a thousand times higher than permitted

And while the United Nations Basel Convention forbids the exporting of dangerous waste and articles (including e-waste) to impoverished countries, some countries shield themselves behind different European legislation which does permit the exportation of reusable products to these countries.

They also often disguise the shipments as an act of goodwill, claiming that second-hand devices reduce the digital divide. The reality is that between 25% and 75% are of no use whatsoever and do absolutely nothing to narrow the divide.

As uncovered by the report Holes in the circular economy. E-waste (WEEE) leakage from Europe, carried out by the NGO Basel Action Network, and in which the EQUO Foundation collaborated, some 6% of the scrap equipment tracked for the purposes of the study was exported, and more of half of it ended up in developing countries.

For many, raking through the rubbish is the only way they can feed their families

The investigation was carried out in ten EU countries (including Spain). For the study, GPS trackers were installed in order to monitor their location in selected pieces of electronic equipment before delivering them to recycling centres where correct waste management is supposedly guaranteed.

While Europe sends its e-waste to Africa, for many, raking through the rubbish is the only way they can feed their families. The dump is therefore the source of income for thousands of people who hunt for aluminium, copper or iron which they subsequently sell.