In 2014 we set out on an adventure. We could never have imagined that we would meet so many people and would go to so many places with our Yarn against sexist violence. 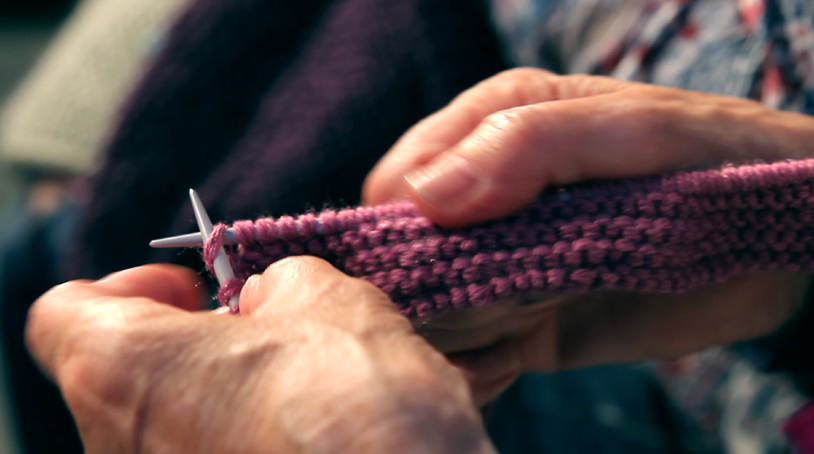 Initially we wanted to demonstrate against a violence which surrounded women with names and stories, some of whom we knew. We knew how to knit and we wanted to send society a message.

Knitting has always been considered an activity naturally carried out by women, an almost fun chore, connected to a ritual, intimate and personal. Then this work left our private sphere and became public. When we look at the enormous bow that now measures 6 km, we see its colours, its techniques and think of all the knowledge encompassed in every knot, in every piece of braided or stretched yarn. Knowledge that has been shared alone or with others, orally, from hand to hand, and which has meant hours and hours of work to our forebears.

And we are now in the present day, with a transformation which has become pressing. The stitches we make with our needles turn into words, the knitted result, demands, and the selfsame knitting is a code which follows a passage to become language and turns into thought. But this is not just any kind of thought. Yarn is for us a passage from work by women to a feminist proposal.

Thus, as a logical evolution, we have the “Yarn against sexist violence” meetings on feminist thought and the documentary Hilos de sororidad.

Our travelling Yarn speaks to those who see it hanging in the public space and, with our handmade work, we question society and ourselves about violence

We are knitting warriors; our travelling Yarn speaks to those who see it hanging in the public space and, with our handmade work, we question society and ourselves about violence. And we do it with that same obstinate determination involved in knitting. With that insistent time, at once personal and collective, which engages and fills us with sisterhood, which makes us political subjects. Which builds a story and enables us to turn ourselves into the voice and thought that wants a more equalitarian world and a feminist future.

Harituz / Astigarraga School of Equality for Women and Men