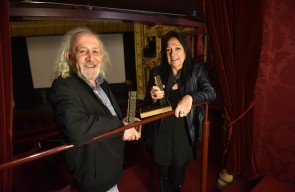 The filmmakera Montxo Armendáriz and Puy Oria will receive this year the Award of the 18th San Sebastian Human Rights Film Festival. The prize ceremony will be at the Victoria Eugenia Theater today Friday 30 at 18:00, at the Closing Night of the Festival.

Montxo Arméndáriz and Puy Oria are two fundamental figures of Spanish cinema in the last decades, responsible for some of the classic and indispensable titles of its recent history.

Puy Oria was involved in production work on movies such as ¡Dispara! (1993), La pasión turca (1994), La ley de la frontera (1996) and Profundo carmesí (1996) before creating Oria Films together with Armendáriz. She has taught on the subject of audiovisual production at different centres and has held positions in associations including the one dedicated to women independent producers, PIAF (Productoras Independientes Audiovisuales Federadas), of which she has been the president in recent years.

In 1999 the two created Oria Films, proceeding to produce the following films directed by Armendáriz: Silencio roto (2001), Escenario móvil (2004), Obaba (2005) and No tengas miedo (2011), highlighting their predeliction for addressing all kinds of social issues, their commitment to historical memory and their interest in narrating the realities of their time and their surroundings.

This same tendency is also visible in the titles they have produced over the last two decades, such as La guerrilla de la memoria (Javier Corcuera), El inmortal (Mercedes Moncada Rodríguez, 2005) and De tu ventana a la mía (Paula Ortiz, 2011).