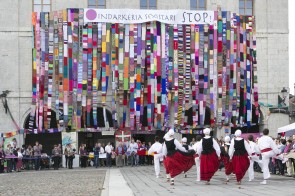 The San Sebastian Human Rights Film Festival now has its own channel on Filmin, Spain's biggest platform for movies and series.

The Festival, which will celebrate its 18th edition from April 23-30, recently launched its own channel where you can now access films screened at earlier editions of the event –Hannah Arendt (Margarethe von Trotta, 2012), Coming Home (Zhang Yimou, 2014), By the Grace of God (François Ozon, 2018)– as well as titles directed by filmmakers to have received an award from the festival in recognition of their careers –Salt of this Sea (Annemarie Jacir, 2008), Nostalgia de la luz (Patricio Guzmán, 2010), Love is All (Kim Longinotto, 2014), The Workshop (Laurent Cantet, 2017)–.

The channel includes the premiere on Filmin (from March 22nd) of the documentary Hilos de sororidad (2019), directed by Eneko Olasagasti and premiered at the festival last year.

This film and many more are now available for viewing on Filmin: www.filmin.es/canal/festival-de-cine-y-derechos-humanos