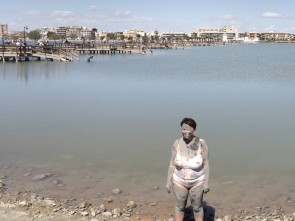 The exhibition AridA – Photographs by Bea Rivas, included at the 18th Human Rights Film Festival, will be open at FNAC Donostia between April 20th and May 31st.

Spain has been included in the list of the 33 countries facing the greatest problems of drinking water availability by 2040 due to climate change. The Segura River basin is a true mirror of this ominous prediction. Having received very little rainfall for years and being a place of high temperatures, it survives endemically and depends on water diverted from another basin on the Tajo, result of the highly ambitious hydraulic construction built in the 70s, when environmental and social impacts were barely taken into account.

Since then, the region's economy has been constructed around a resource it doesn't have, destroying the area's natural hydrographic balance. Water has become a resource for which different economic activities compete.

Bea Rivas (Madrid, 1976) focusses her principal personal projects on subjects related to the environment, the economy and the social issues that shape the real world.