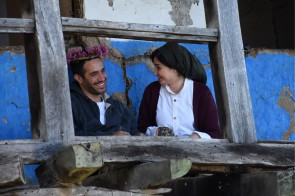 “Due obedience” and moral dilemma

Heshmat, an exemplary husband and father, gets up very early every day for work. While Pouya can't imagine killing another person, he's just been told that he must do so. Javad doesn't know that asking his beloved to marry him won't be the only surprise on her birthday. Bahram hasn't been able to practice medicine for years. He has decided to tell his visiting niece why he lives in the countryside keeping bees.

Four stories directed by the Iranian filmmaker Mohammad Rasoulof, hounded for more than ten years by the authorities in his country for his work. All four look at the death penalty and individual freedom in today's Iran.