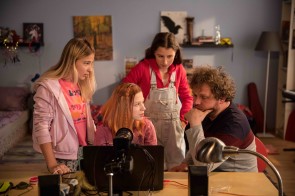 Three actresses, three children's rooms (recreated in a studio), 10 days and 2,458 sexual predators. An experiment in online child harassment. Three actresses who are over the age of 18 but look younger join a variety of social media using false profiles, pretending to be 12 years old. They chat and liaise with men of all ages who have sought them out and contacted them. Most of them ask for sex videos and send them pictures of their penises or links to porn sites. Some even try to blackmail them. The documentary finally reveals the face-to-face meeting between the three protagonists and some of these predators. Their tactics gradually turn against them as the huntsmen become the hunted.

TALK: Manu Viota (head of the Central Section of Cybercrime with the Ertzaintza police force), Ana Estévez (teacher at the Personality, Evaluation and Psychological Treatment Department of Deusto University)