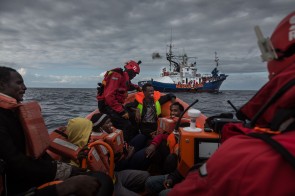 Saving lives is not a crime

The Stella Maris Berria is a tuna fishing boat destined for the scrapyard. However, Iñigo Mijangos and Iñigo Gutiérrez, two members of the Humanitarian Maritime Rescue NGO, have an unusual idea: to transform the fishing boat into a rescue vessel in order to save drowning refugees in the Mediterranean Sea. This is how the Aita Mari was born.

The documentary narrates the odyssey spanning more than two years from the moment the ship was rebuilt until its first rescue. Aita Mari is the story of the collective efforts of a group of anonymous men and women to help people as they flee from war and famine.