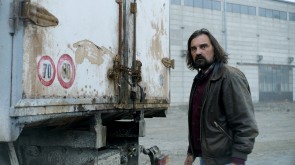 The heavy load of the Balkans War

Vlada works as a truck driver during the bombing of Serbia by NATO forces in 1999. His latest job is to carry a mysterious load from Kosovo to Belgrade, through a territory which is unfamiliar to him, inhospitable and dangerous, in a country ravaged by the war. He knows that when the work's done he'll have to go home and face the consequences of his actions.