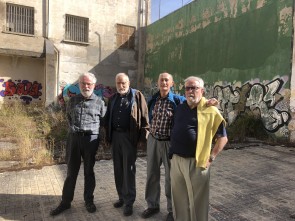 A real voyage in an apparently unreal situation. Four priests incarcerated in Zamora's prison for priests (1968-1976) return to visit the jail where they were condemned, in some cases, to sentences of more than ten years for having given sermons in which they denounced the repression under Franco. It was precisely Franco who, using the Concordat signed with the Vatican, created that Concordat Prison for priests, the only one of its kind in the world.

This is an unusual journey; people don't usually go back to visit the prison where they were detained. It is the bridge for telling the tale of the true journey to which 53 religious men from Madrid, Galicia, Catalonia and the Basque Country were subjected during their forced transfer to said jail. A journey aiming to retrieve a story still unknown today. A journey to prevent it from being forgotten.