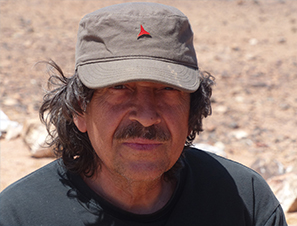 Printer and publisher who has brought out more than 80 titles, three on the subject of the Sahara: Sahara en el corazón, Cartas y discursos de Lualy Mustafá and Música Haul. Vice-president of the Association of Friends of the Sahrawi People in Madrid. Collaborator with the Sahrawi Delegations since the mid-90s and of the FISahara in its early days. Ideologist and promotor of the project Sajara4x4Solidario in 2006. In 2013 he promoted the project of a dental clinic in the Liberated Territories: two fully equipped dental units set up in Tifariti Hospital. And in 2014 the Healthcare Project in the Liberated Territories, DentalCoop: 30 commissions, 250 volunteer workers in different medical specialities, more than 6,000 patients attended to and several training courses given to the Sahrawi health staff.