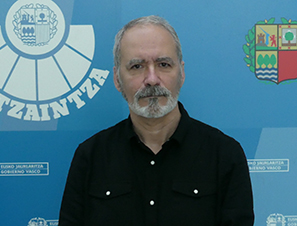 Head of the Central Section of Cybercrime with the Ertzaintza police force. An Ertzaintza officer since 1998. He trained at the Central Section of Cybercrime in 1998 and has been its director since 2003. As well as research in cybercrime, an essential part of his work lies in prevention. He has therefore given hundreds of talks to boys and girls, adolescents, parents and teachers. He participated in the worktable on the protection of children Network on Minors and the Internet in 2013 directed by the Basque Government and presented a paper before the Senate committee on the 2nd Strategic National Plan for Childhood and Adolescence on the Online Protection of Children.

Film: Caught in the Net