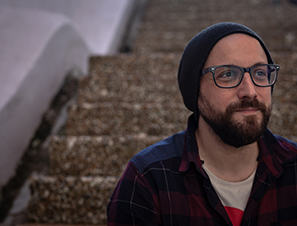 A director and photographer, Javi has been working for more than ten years as a photojournalist and has published in media including The Guardian, El País and Euronews. In 2015 he made the documentary Invierno en el Donbass, where he looks at the suffering of the civilian population during the war in Eastern Ukraine. Also in 2015 he directed and produced Zaatari Taekwondo School, a short documentary for the North American NBC network about a small taekwondo school in the Zaatari refugee camp in Jordan. His first medium-length documentary, Just Wait (2016), narrates refugee living conditions following the agreement between the European Union and Turkey, and the work of Basque NGOs on Chios Island in Greece. That same year he co-directed with Santi Donaire the full-length documentary 113, narrating the struggle of a group of relatives of people murdered by the Franco dictatorship. In 2018 he presented the short documentary Room 601 of City Plaza, the story of several Afghan refugees during their stay at the autonomously-run City Plaza Hotel in Athens.