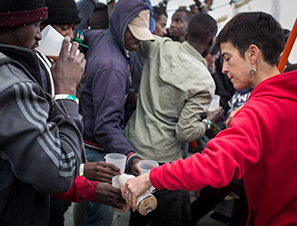 Aramaio, 1977. With a diploma in nursing, today she works at the Arrasate hospital. Her first contact with the volunteering world was on a trip to Nicaragua with the NGOs AMSOGRA and SEPAR in 2014. She has also participated in projects on Health Education in Ecuador with Enfermeras Para el Mundo (Nurses for the World). After the poorly named refugee crisis, she decided to volunteer as a nurse in Greece. On her return, and after watching the documentary Zuk, she contacted Salvamento Marítimo Humanitario (SMH) and began working as coordinator of the project run by SMH on the island of Chios to provide care for people in the Vial refugee camps, having returned on three occasions as a volunteer as well as to monitor the project. She has worked as a nurse on all three missions of the Aita Mari rescue ship.