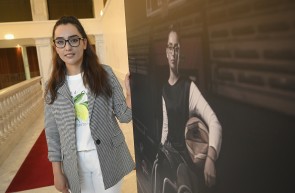 The female Afghan activist and basketball player Nilofar Bayat, that features on the poster for the 19th San Sebastian Human Rights Film Festival, to take place from 1-8 April 2022 at the Victoria Eugenia Theatre, has visited this morning San Sebastian.

Next Monday, April 4, she will come back to talk to the audience after the screening of the film The Breadwinner (2017).

Parvana is an 11-year-old girl growing up under the Taliban in Kabul, the capital of Afghanistan. When her father is arrested, the family is left without income. Since it is forbidden for women to earn money, they decide to transform Parvana into a boy so that she can work.

The Breadwinner explores the culture, history and beauty of Afghanistan from the point of view of women. A captivating film on bravery, family ties, achievement and loyalty in times of war. The story of a heroine who arms herself with courage and imagination in the times of misogyny and violence in which she must live her life.

Nilofar Bayat was only a girl when a rocket fired by the Taliban militia entered her home, killing her brother and leaving her seriously wounded. She has suffered from serious mobility problems ever since. Despite her situation, Nilofar forced herself to make the most of the slight relaxation felt when the Taliban left power to take up her studies, now that she was allowed to, first of all at secondary school and later at university, where she studied Law.

A worker with the International Red Cross at its rehabilitation centre in Kabul, there she promoted sports among women with functional diversity, an endeavour which led, with time, to constitution of the national wheelchair basketball selection. Captain of the team, she participated in numerous international competitions; however, just as they we were working on a new round of meetings, the Afghan Government fell, having lost the support of the military coalition coordinated by the United States.

Nilofar immediately realised that if in their day the Taliban had taken part of her body, now they would strip her of everything she had achieved and, above all, the hope of seeing the women of her country move towards equality and progress. She didn't give it a second thought: convinced that her life was in danger, she decided to launch an SOS through her journalist friends, a plea answered by the Spanish Government, who issued her with a pass for her evacuation from Kabul.

Once in Spain, the Bidaideak association of persons with functional diversity reached out to help her start rebuilding her life. Nilofar plays basketball in their team, the Bidaideak Bilbao BSR, having joined other women to create Free Women for Afghanistan, from which she aims to develop collaboration projects with groups of women with disability in her country and, above all, to condemn the situation that the Taliban Government envisages for them.