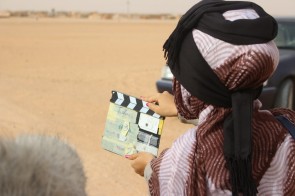 The E. F. A. Abidin Kaid Saleh – Western Sahara Film School will receive this year the 19th San Sebastian Human Rights Film Festival Award. The prize ceremony will be at the Victoria Eugenia Theater on Friday 8 at 20:00, at the Closing Night of the Festival.

Cinema barely existed in the Sahara of 2003 when FiSahara touched down in the refugee camps like a mirage in the desert, with its 35 mm projectors, two planes packed with filmmakers, journalists, visitors and a dream that seemed almost impossible at the time: to take cinema to the Sahrawi population who had been living in exile since 1975.

The result of that dream, a reality today, was birth of the Abidin Kaid Saleh Film School in Bojador camp, where the first generation of Sahrawi filmmakers were trained and a new art was created: filmmaking with the Western Sahara stamp.

From the early movies to come out of the FiSahara workshops until today, young Sahrawi filmmakers have produced dozens of short films telling stories from their own point of view. They address vital issues: youth unemployment, the precarious health situation, historical memory, beauty standards, depression and Internet addiction.

And with its mobile movie theatre, Solar Cinema Western Sahara, the school takes films to all of the camps throughout the year. Cinema is not only a new art with endless creative possibilities. For the Sahrawi people it has become a vital tool for preserving and transmitting their culture and drawing attention to their struggle; it lights up the path towards the culture of peace and casts a lifeline to those who have lost hope.