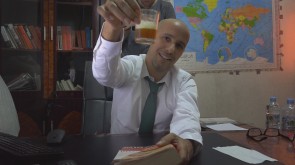 Mohamedou Slahi was incarcerated Guantanamo for 14 years, where he was tortured for the first two of them, between 2002 and 2004. He wrote a book that became an international best seller (and was taken to the cinema years later), where he talked about his guards and torturers, who would use masks and pseudonyms. When Slahi is released from prison in 2016 and returns to Mauritania, the journalist John Goetz sets out on a mission through the United States to search for some of those guards, with whom Slahi would like to talk. But it's not easy to find the members of the team who worked on Guantanamo's so-called "special projects".