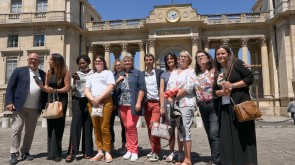 Vulnerability of the carers’ sector

In their new cinematic adventure, documentary-makers François Ruffin and Gilles Perret –the former of whom directed the hit movie Merci patron! (2016), while both made the later J'veux du soleil! (2019)– set out on a trip through France to find and defend the work of the women who have always, and even more so during the recent health crisis, cared for those who are elderly, sick or disabled, and that of cleaners in places like the National Assembly. These are workers who are ignored by French legislation, with no minimum wage, no limits on their working hours and no social recognition. Now they have risen to demand their rights.