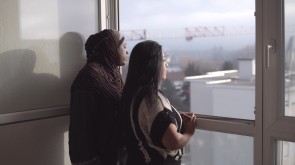 Beside a river, between a forest and a snow-capped mountain, the fog is pierced by the towers of a district: Las Islas. Its inhabitants seem to have lived there forever. But they must soon leave their homes. Only a few kilometres from the border with Switzerland, the 257 families of this social housing district are getting ready to move; they are being relocated to other places because their homes are to be demolished to make way for private houses that won't be for them. How do you put ten, twenty or forty-five years of life into cardboard boxes? To go where?