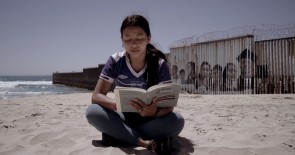 The film sets up a dialogue between the transit of thousands of people towards two of the most convulsive borders: the one along the USA/Mexico border and the one that separates Spain from the rest of Europe. The harshness of the violence during the transits contrasts with the beauty of the landscapes through a story charged with meaning. To understand why people flee we would have to ask ourselves many questions. And we may not like the answers we hear. Across the continents, people are fleeing to a Northern Wildness where inequality is all more entrenched and where walls are getting bigger. Sometimes, looking back can help us empathize with current migrations and wonder how we welcome these refugees because... What is wilder, a person trying to cross a border or the border itself?