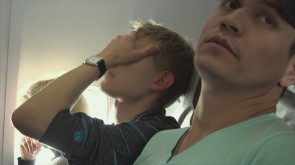 The LGTBI+ purge in Chechnya

Veteran documentary-maker David France (How to Survive a Plague, 2012) follows the everyday lives of a group of activists who fight against the anti-LGBTQ "cleansing" imposed by President Ramzan Kadyrov in Russia's Chechen Republic, a policy of arresting, torturing and, in many cases, killing members of the collective. In the endeavour to show the world the situation in Chechnya, this film (made using "deepfake" techniques to mask the identity of many of the people interviewed) approaches the reality of this secret activists' network which has also helped dozens of victims to escape from the country.