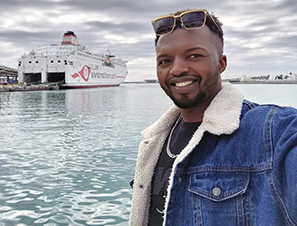 Born in Cameroon, he lives in Oñati. He left his country in search of a safe place where he could live in peace. He is currently the janitor at the centre for asylum seekers, Larraña Etxea, managed by Zehar. He arrived in Oñati as a resident of the centre and, having spent a few months in Bilbao after leaving it, decided to return to that Gipuzkoan town, which he now considers his home. He is currently studying welding and boilermaking. Alain is one of the main characters of the documentary Norte salvaje.