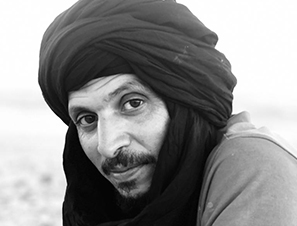 Born and raised in the Sahrawi refugee camps in Tindouf (Algeria). In 2015 he studied at the Abidin Kaid Saleh Film School, in the Bojador camp. Following his graduation he joined the teaching staff at the same school. He is currently taking a diploma course in production, with a grant from the Madrid Film Institute. He has directed Daniela, el valor de la perseverancia and has had the opportunity to collaborate on several co-productions, particularly including Hamada (2018), by Eloy Domínguez Serén. With his second short as a director, En busca de Tirfas (2020), he landed the Audience Award at the Uruguayan International Film Schools Festival and 2nd prize ex-aequo at the FiSahara 2021.