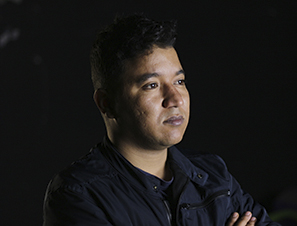 Born in the 90s in the Sahrawi refugee camps in Tindouf (Algeria). Having completed his studies he took an interest in the cinema, becoming one of the first round of students to graduate from the Abidin Kaid Saleh Film School. In those early years he worked on the production of Patria dividida (2013), a collaborative project that went on to become the first film of Sahrawi production. Today he is one of the teachers at the same school. He has participated in films including Exodus (Hank Levine, 2017) and Batallón a mi ritmo (Eimi Imanishi, 2016). Winner of the 2nd prize ex-aequo at the FiSahara 2021 with his directorial debut, The Price of Beauty (2020).